When Brighton was still a village: Frederick McCubbin revisited

A search through the Society archives reveals a fascinating letter from a prominent colonial artist's daughter. 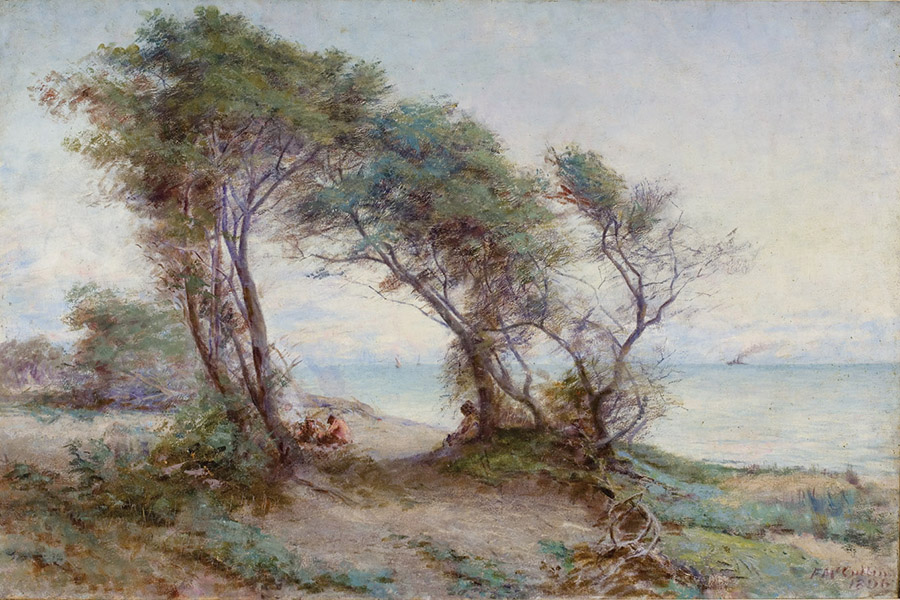 Frederick McCubbin, 'Brighton Beach', 1896. Mildura Arts Centre.Frederick McCubbin (1855-1917) was a prominent member of the Heidelberg School, the first artists to see and paint the ‘real’ Australian landscape.  You are probably familiar with his powerfully nationalistic triptych The Pioneer, in the NGV Australia, which was painted three years after Federation. The Age referred to the painting on 16 August 1905 as ‘a poem of democracy' and declared that the work by Mr McCubbin is ‘to be hailed as an irrefutable demonstration that Australia can produce a strong and beautiful national art of her own’.

For over twenty years, McCubbin was also a distinguished teacher at the Gallery School and was affectionately known as ‘the Prof’, ‘the Master’ or ‘Mr. Mac’. He is buried in the Brighton General Cemetery.

Searching through back copies of the Society’s newsletters recently, I came across a letter written in 1987 by McCubbin’s daughter, Mrs. Kathleen Mangan, writing about the time her father lived in Brighton.  The letter was in response to a request by the Society’s researcher at the time, Miss Hilary Bullock, whose foresight we gratefully acknowledge. Because it is such an interesting and important social document I reprint it here for your information, with apologies to those who are familiar with it. Those wishing more information about her era may like to read Mrs. Mangan’s autobiography, Daisy Chains, War, then Jazz (Hutchinson, 1984.)

‘When my parents moved to Brighton in 1896 the Town was still a village and the beach was deserted and overgrown with ti-tree and an occasional picturesque fisherman’s hut. A mile or so inland there were farms and country roads and sheep and cattle grazing on the pastures of a pleasant countryside. Brighton had not, as yet, become the haunt of holiday crowds. Its shoreline was completely deserted. 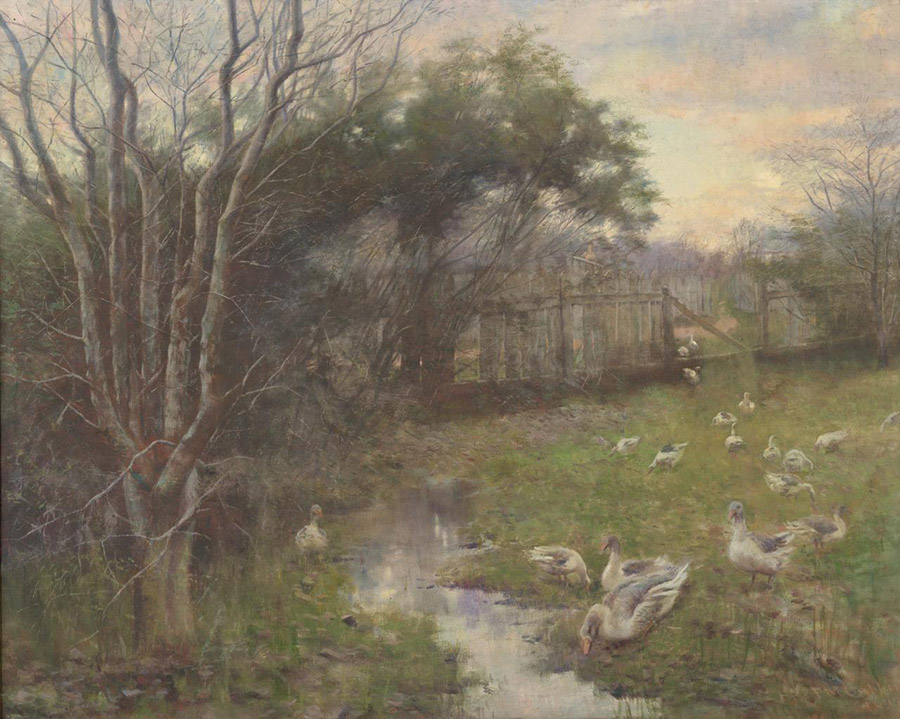 Frederick McCubbin, 'A Winter Evening', 1897. NGV Australia. This painting depicts the small steam that ran through the McCubbins' Brighton property, on the corner of New Street and Kinane Street.My father and mother, Anne and Frederick McCubbin, rented a house in New Street, being the property of Mr. Thomas Kinane, and lived there until 1901.

According to my father’s book ‘The Art of Frederick McCubbin’ it was an old weatherboard house, situated in the remains of a large and long since abandoned orchard. Grass had been allowed to grow unchecked beneath the fruit trees; a little stream flowed through the foot of the orchard; an occasional cow wandered in from a neighbouring paddock and browsed there contentedly. This mingling of orchard, wilderness and cultivation was picturesque in the extreme and formed an incomparable painting ground for my father.

The years my parents lived at Brighton seem far away now and remote. Yet, to them, they were vital years- years in which they saw the last flowering of that great Australian Art Movement which had commenced at Box Hill in the mid-eighties, and later became known as the Heidelberg School. The last foregathering of that brilliant group of artists (which later disintegrated and fell apart for ever) occurred at Brighton.

In those days the foot of the property at New Street faced on to the railway line. And, according to my mother, my brother, Sydney, was so captivated by the old steam engines he used to spend the greater part of his day waiting and watching for one of these engines to pass by. “Those engines, belching smoke and steam, appeared to completely fascinate him” she used to say. “One day we found him there with his chin wedged between the pickets of the fence, fast asleep.”

The Brighton house with its orchard and rambling old garden was admirably suited for entertaining (and) during the summer months there were regular gatherings. In addition to those artists resident in Brighton [John Mather, Archie Colquhoun, John Longstaff] Tom Roberts, Arthur Streeton, David Davis and Walter Withers would all turn up. 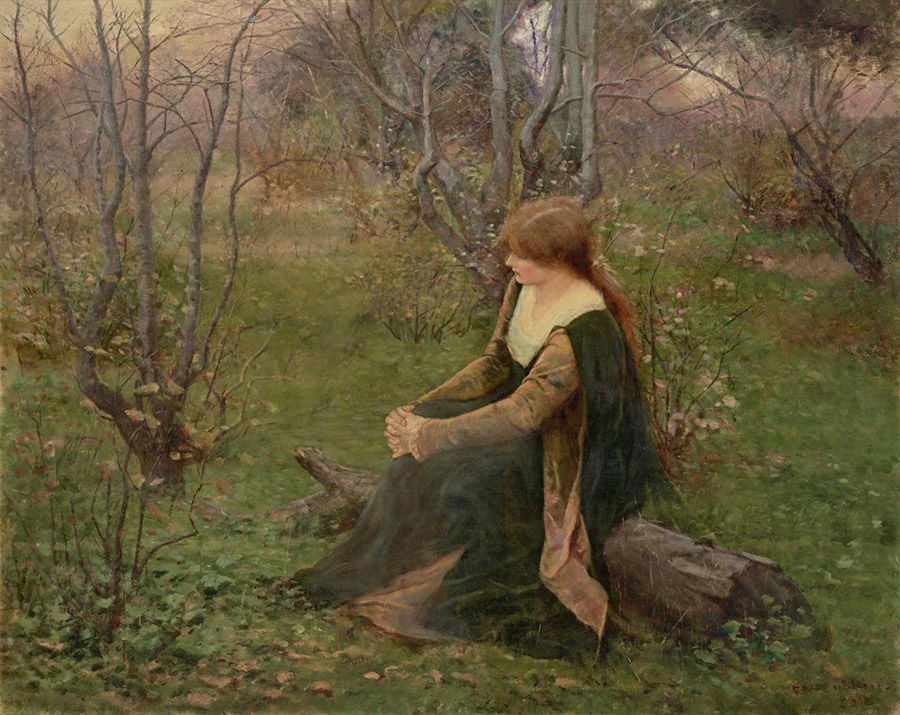 Frederick McCubbin, 'Autumn Memories', 1899. NGV Australia. This painting depicts the artist's wife, Annie McCubbin, at the Brighton property.Streeton, in a letter to Tom Roberts dated 18 December 1896, wrote, ‘I walked over to Prof McCubbin’s yesterday and had tea with him in his garden.  Mrs Prof in a harmonious yellow gown; all the little Profs buzzing round the garden of fruit trees and the haystack.  The Prof is a married man, very happily and securely married.’

‘I can remember my father describing those evenings and how they used to sit out in the garden under the trees, yarning, sipping beer and endeavouring to solve the problems of the world. The shadow cast by the Land Boom (1894) was just beginning to dim the glow and fervour of the Heidelberg School days and tinge their minds with the first hint of depression and gloom. The Cubist revolution in the art world, commenced by Picasso and Braque had not get arrived, but they were well aware of the French Impressionists. They all wanted to know more about these exciting painters yet somehow they felt vaguely threatened. The wonderful ‘ golden period’ in the world of Australian art, through which they had passed, was behind them and could never be recaptured. The future was promising, yet menacing, especially for my father, who even then sensed the approach of War – a war that would change the future and turn the world of art upside down.

The Brighton influence on my father’s work was of great significance. He was still working at his large subjects and Brighton with its wild orchard and garden was a perfect setting for WINTER’S EVENING, TI-TREE, BRIGHTON BEACH and THE OLD FENCE. One of his most famous, of course, was ON THE WALLABY TRACK, depicting my mother seated beneath a tree with a baby on her lap, watching a man lighting a fire.

Frederick McCubbin, 'On the Wallaby Track', 1896. Art Gallery NSW. Painted in the Brighton garden with Annie, their baby son, and Annie's younger brother Michael Moriarty as models.It was at Brighton that my father commenced to take up portraiture seriously for the first time. A large portrait of my mother came first, then followed portraits of Mr. Louis Abrahams and the late Mr. Panton, the well known Magistrate.

The final years at Brighton were somewhat saddened by the departure of so many of my father’s old friends.  Tom Roberts left for Sydney and was later joined by Arthur Streeton, who sailed with Roberts to London when both artists decided to settle in England. Tucker and MacKennal had already quitted this country, and most of my father’s students, of whom he was very fond, were gradually drifting off to study overseas.

The old house that had seen so much hospitality dispensed in previous years no longer echoed with the merriment and laughter of his old friends and my father became depressed and restless.

After a short visit with my mother and the family to Tasmania, he left the old house with its enchanting orchard and garden and went to live at Carlton in the year 1901, leaving behind fond memories of Brighton and one of the most memorable periods of his life.’