A helping hand: The Brighton Society for the Re-adaptation of Returned Soldiers

War may have ended on 11 November 1918, but for many the scars lingered long after the last shots were fired. Tens of thousands of ex-servicemen and women returned home with life-altering injuries: blindness, deafness, lost limbs, debilitating bullet and shrapnel wounds, respiratory diseases from gas attacks, to say nothing of the psychological trauma. For many of these people, returning to their former lives and jobs simply wasn’t possible.

Brighton engineer John Montgomery Coane believed that it was the duty of communities to support these returning soldiers. As early as 1915 he wrote to the Red Cross, suggesting that they lead an organised effort to help soldiers with disabilities re-adapt to civilian life. He argued for a central ‘re-adaptation’ association that would coordinate with local branches, each of which would work within their community to offer wounded men training in new professions. 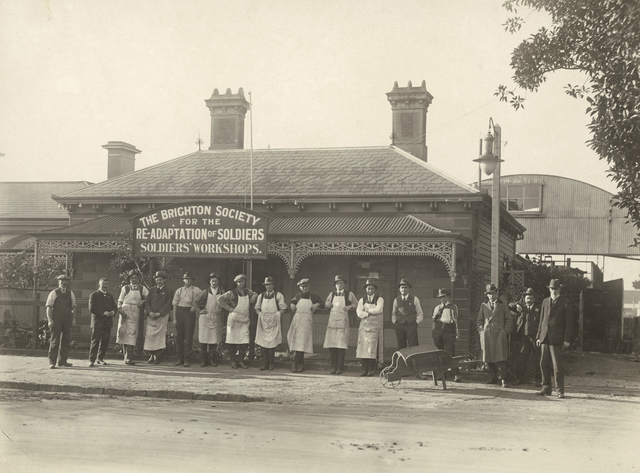 When nothing came of his letters, Coane and his colleagues in Brighton decided to go it alone. In February 1916 they pushed ahead and formed the Brighton Society for the Re-adaptation of Returned Soldiers. With its stated aim of helping veterans with “physical or mental disability” to regain their independence, it was one of the first organisations in Australia dedicated to repatriation.

A generous donation of £500 from wealthy racehorse owner-trainer Eric Alfred Connolly got them up and running, and within a year they had established a headquarters opposite the Town Hall in Wilson Street.

As an engineer, Coane was particularly excited by reports coming out of Paris of a new, functional prosthetic arm designed by Jules Amar. Amar believed that prosthetics should first and foremost be functional: rather than trying to perfectly replicate a natural arm, his arm was designed to make it easier for amputees to carry out daily tasks. A false hand could be swapped out for a variety of attachments, including pliers, hooks and magnets, to assist with different forms of labour.

Coane was able to obtain the specifications for the Amar arm from Paris and arranged for them to be made locally. The Society provided them to ex-servicemen free of charge.

The Amar arm offered a path back to work that some men had believed permanently closed to them. One former soldier, a farm labourer who had lost an arm, struggled with two different prostheses before being gifted an Amar arm by the Society. With it, he found he was readily able to work a plough, handle a pick and shovel, and carry out heavy farm work.

By the end of 1919, the Society had distributed 92 prosthetic arms, including both Amar arms and more visually appealing “Sunday arms”.

However, not all veterans were able to return to their pre-war occupations. For these men, the Society offered free training in new trades, assistance finding employment and a weekly allowance to supplement their pension until they found stable work. Originally setting their sights on local men, the Society was soon training ex-soldiers from across the state.

In the Society’s workshop, trainees learned carpentry and joinery, French polishing, boot repair, saddlery and harness making from skilled instructors, some of whom were returned soldiers themselves. Others had the chance to learn in the field from local market gardeners, nurserymen and tradesmen, or to enrol in courses in typing, stenography and book-keeping.

A typical example is manual labourer William Quirk, who was invalided out in 1917 with permanent back and leg injuries caused by shell wounds. Unable to return to the heavy manual work he was used to, he was referred to the Re-adaptation Society, where he learned boot-making, ultimately establishing a business of his own in Brighton. “It is absolute the best thing I ever tried,” he told Returned Soldiers’ Association Magazine in 1918.

More than just practical skills, the Society offered much-needed emotional support. Men who feared they would never again lead fulfilling, independent lives were treated and encouraged to see themselves as productive, valued members of society. In the staff and fellow trainees, they found a supportive community and enduring friendships.

Another man, a leg amputee who received training in boot repair, also went on to establish his own business in Brighton. Keen to ensure the man’s success, society manager William Groom took the creative approach of visiting a local school and asking to address the children. He told them the story of a brave but absent-minded digger who had left his leg behind in France, and who could now be found mending shoes in his shop in Brighton. The following afternoon, the shop was besieged by children eager to catch a glimpse of the soldier; the day after that, the man was inundated with repair jobs for the children’s parents.

Not every trainee thrived. In some cases, men suffering debilitating psychological trauma were referred to the Society by medical offers who felt learning woodwork would be ‘therapeutic’. The Society did its best to offer aid and encouragement to these men, writing optimistically of their progress. However, lacking the serious mental health support they needed – and which was perhaps beyond most doctors of the time – some would continue to struggle for many years.

But for many, the Re-adaptation Society was a godsend. By the end of 1919, ten trainees had opened businesses of their own, one was farming his own land in Ferntree Gully, and sixteen more had found good jobs.

All of this work was made possible by a supportive local community: the Society was funded entirely by donations, mostly in the form of ten shilling annual subscriptions from local residents, as well as charity carnivals and blackwood furniture made by the trainees. The latter became quite coveted items, and by early 1920 the men were barely able to keep up with the incoming furniture orders. Town clerk and Society Vice-Chairman J. H. Taylor was the proud recipient of a small cedar cabinet, which he described as one of his most treasured possessions.

But by now, the Society was having difficulty finding suitable trainees. Money, too, was becoming an issue: it cost over £2,000 a year to train twenty men and, with the war over, donations were no longer flowing so easily. At the end of 1920, the Society wound up its operations. It had only been five years in existence, but for many of the veterans who passed through its doors, its impact would be felt for much, much longer.

"The Brighton (Melbourne) Society for the Readaptation of Soldiers", The Australasian, 2 August 1919, p. 58

"A demonstration of the use of the Amar artificial arm at the Cheeseman Nurseries, Brighton, Victoria", The Australasian, 1 March 1919, p. 51

"The Brighton Society for the Readaptation of Soldiers and the Brighton Local Committee", Repatriation vol 1, no. 7, 25 September 1919, pp. 4-5