The house that Esmé built

Esmé Johnston stands out as a colourful figure of 1930s Brighton, a journalist, actress, radio announcer and script writer with a palpable zest for life. 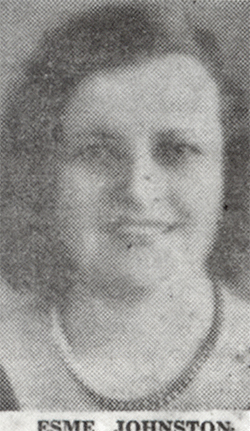 Esmé Johnston, 1936Born in 1896, from the early thirties she acted, announced and wrote for Melbourne radio, first at 3AW and then at 3XY, where she scripted the popular daily 'Children's Hour' series. She was also a regular writer for Home Beautiful magazine, taking readers inside stylish Melbourne homes, including Brighton's now-lost Penn-y-Brynn, St Ninian's and Barone.

In her biography of Edna Walling, a close friend of Esmé's, writer Sara Hardy described Esmé as "full of enthusiasm and fun", a fashionable dresser who loved to laugh, enjoyed a good drink and had "a remarkable ability to mimic all kinds of voices and accents". She was fond of swimming, riding, theatre and books, and around 1929-30 her interest in architecture prompted her to embark on what she called an "adventure in house-building", designing and constructing a three-story cottage that still stands today at 38 Grosvenor Street, Brighton.

Today that house is under threat. A planning application has recently been lodged with the Bayside City Council to demolish the site in order to make way for two new townhouses. If this is approved, a significant piece of Brighton's built heritage will be obliterated.

Below, we are republishing Esmé's first article for Home Beautiful, first printed on 2 Febuary 1931, in which she describes the "adventure" of building her Grosvenor Street home.

Describing an adventure in cottage building 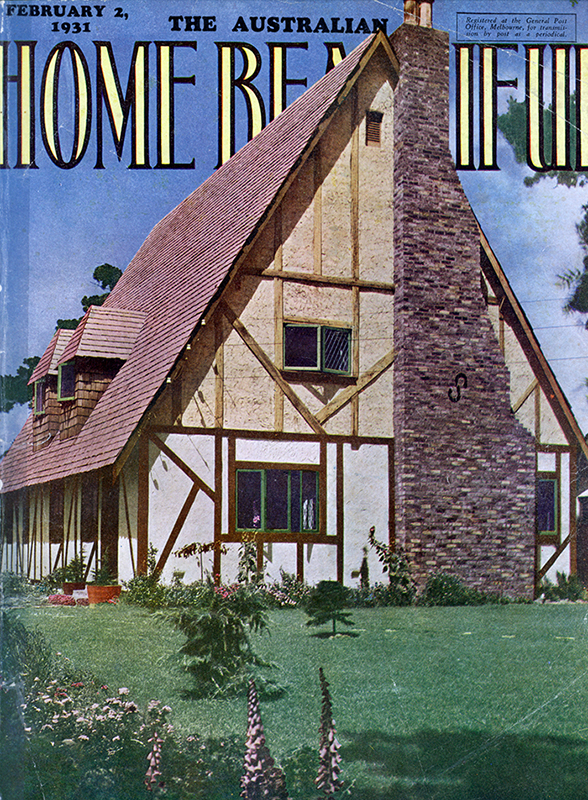 Cover of Home Beautiful, 2 February 1931, featuring Esmé's housePassing my cottage one day, a boy tugged at his father's sleeve. "That's a home-made house, Dad," he said. "Yes," said his father, "I know it is. But I like it."

The object of this kindly comment is my first adventure in house-building - a half-timbered cottage in Grosvenor Street, Middle Brighton. With its high-pitched shingled roof, timbered and plastered walls, and diamond-paned windows, it is the nearest approach to an Elizabethan dwelling which it was possible to create out of a strictly-limited bank amount.

There have been many criticisms of the cottage. Some of them caustic, some inquisitory, but quite a lot (I am glad to say) admiring. Perhaps the most heartening, from an architectural viewpoint, was the comment of the old English-woman, who came and sat down upon a pile of shavings in the living-room, while the house was yet incomplete, sighed, and said, "This meks me feel homesick!"

Pencilled at the fireside, many plans were drawn, with one eye on the English cousins of The Home Beautiful. One plan at length emerged and was eventually carried out. It is not what architects would describe as a ‘commercial plan’; yet it is one which panders to most of the reasonable desires of the average householder. The dimensions of the living-room are 31 feet by 15 feet - an interesting shape and a change from practically square rooms - it has a low, beamed ceiling, sand-finished walls, a window-seat and the wide ingle-nooked fireplace of the comfortable old English cottage in which our forbears spent so many bearable years.

The kitchen is quite unforgivably in the middle of the house, with a serving-hatch to make pleasant the way of a rasher of bacon from the stove to the table in the living-room. The bathroom is cheek-by-jowl with the kitchen! 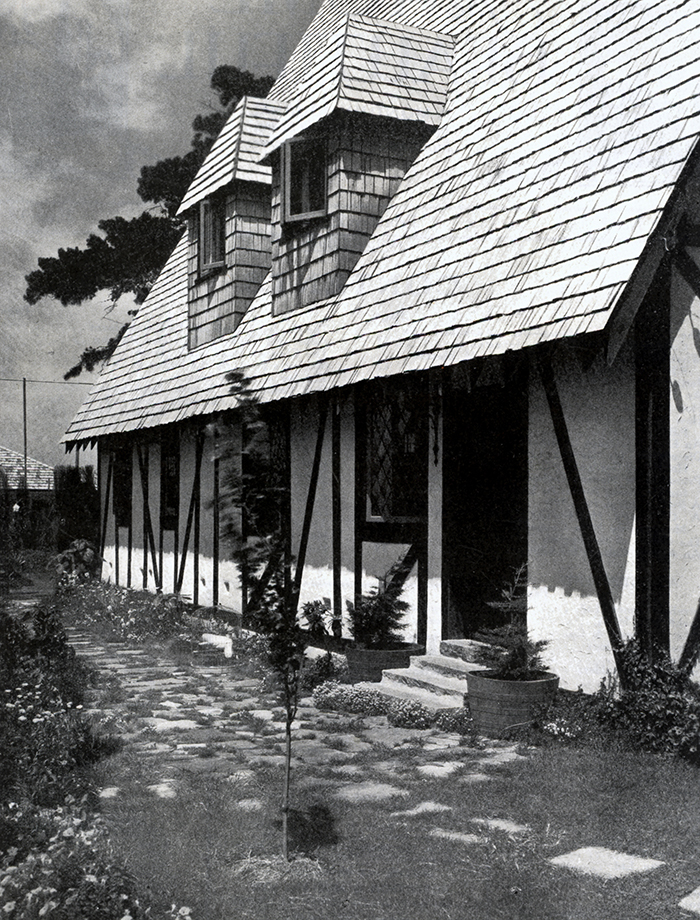 Original caption: "The front entrance, past which a crazy pathway, strewn with flowering plants, wanders round to the pond where the frogs live".

These architectural heresies are quite deliberate, but they are exceed¬ingly convenient. Bathing is a simple matter, but it should be done in the most cheerful surroundings. The bathroom has terrazzo bath and pedestal basin. The floor is made of concrete, with a surface of plaster in which oxide of chromium has been mixed to provide a mellow green surface. The walls are cream sand-finish plaster, and you can splash your hardest, for the whole room is water-proof.

The design for the doors travelled a long way. It was taken from a picture in an American journal - that of an old English barn-door, very simple and strong. Now, reduced to individual doorways, it is still very effective. The timber in most of these doors is hardwood stained to the nearest shade of English oak.

The timbers for the ground floor of the cottage were brought from the bush in a 16-ton truck, at one sovereign per 100 feet. The timbers for the upper floor were bought at auction. Seasoned for ten years, they would have been unpurchasable in any Melbourne yard, at any price.

Unusually (and so far as I know, the only timber house in Melbourne thus constructed) the cottage is built upon concrete piers throughout. Here, the whole house is supported upon concrete and bolted to it. The piers each contain four half-inch rods of mild steel throughout their full length. In addition, a twelve-inch bolt, one inch in thickness, is sunk six inches in the top of each pier, and holds down the six-by-six bearers upon which the floor joists are laid.

In sandy soil, a somewhat similar method has been followed by the Government of the State at Port Melbourne, in its construction of workmen's cottages.

The floor of the living-room was an experiment in construction. I wanted the ‘atmosphere’ of broad boards, and being aware that even the most truly machined tongued-and-grooved boards might need later surfacing, and that the total expense for a floor of twelve-inch boards thus treated would be considerable, I found a shortcut to broad boards at a reasonable rate. 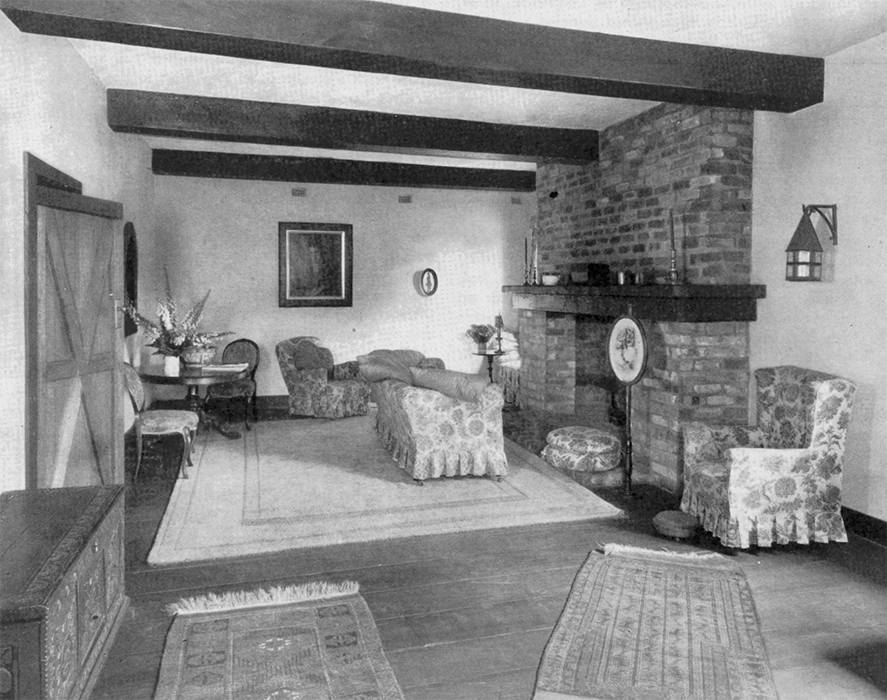 Original caption: "In the living room, with its big ceiling beams and wide floorboards, friends seem to think the experiment has quite justified itself."

I rashly decided to purchase enough ‘green’ timber 12 x 2 boards to floor this room. On their arrival they were stacked in a rack under all the weights available, and they lay there for several months.

When they were laid across the 6in. x 2in. joists they were cramped up very tightly, and secured every 18 inches with four four-inch nails. The last nail was punched into a distinctly-discouraging desert of raw, billowing timber. Tenders to surface this rugged wilderness were called for.

Most of the tenderers came, saw - and departed as quickly as possible, but one sportsman stayed and got into action with an adze and an electric surfacing-machine. The result was a finely-finished floor of beautiful grain, containing nearly two tons of hardwood approaching English oak in appearance, at a cost only slightly more than half of that for which the original quotation was given. It has weathered a year of seasons and nothing has happened to it, so the gamble looks like a winner.

The mantelshelf in the living-room has had an interesting career. It started out in life as an Oregon beam, eleven feet long and six inches thick in a storehouse roof. Salved from the building (after a fire) by Whelan the Wrecker, he later sold it to me for 7/6. Scraped, adzed and patched into sym¬metry and carefully ‘antiqued’, it was lifted into position and now rests above the hearthstone as the most massive mantel - I should imagine - south of the Yarra. However, I may be wrong.

Original caption: "The dressing-table is neatly tucked into the dormer."

The serving hatch mentioned above is made of wild honeysuckle. The timber was obtained as the result of a trip to Balnarring East, where Messrs Knight and Harwood have an estate. There, it was noticed that the billy was being boiled with a wood with a beautiful grain, bearing a strong resemblance to English beech. Treatment of a piece brought back in Mr Harwood's car gave such results that the firm was asked to provide a log, to be used in the interior decoration of the cottage. This log, which was a gift, was sawn up and put into the seasoning rack, and later put to most satisfactory use.

The shingles were an interesting problem - a problem which involved many dealings, dickerings and heart-burnings – 16,000 shingles were needed. After many tribulations the shingles were at length imported from Tasmania at the rate, including delivery on the job, of 5/9 per 100 - a difference which made all the difference.

I was lucky enough to pick up several old ‘pieces’ - no, not museum pieces, just cottagey ‘bits’ like a ship's ‘lanthorn’ dated 1843, which lights the hall interestingly, old wrought-iron hinges for the front door and the gate, a pair of ancient chimney-pots of the eight-sided variety, a few candle-lanterns and other odds and ends which I considered a just reward for a positively sleuth-like perseverance on my part in the pursuit of such fascinating quarry.

It is quite clear, of course, that a house which aspires to look cottagey and ‘old English’ must have an appropriate setting. Gnarled old trees; a path of flagstones, with sweet alyssum growing in the cracks, meandering through a wil¬derness of sunflowers and hollyhocks, foxgloves, rosemary, and lavender. 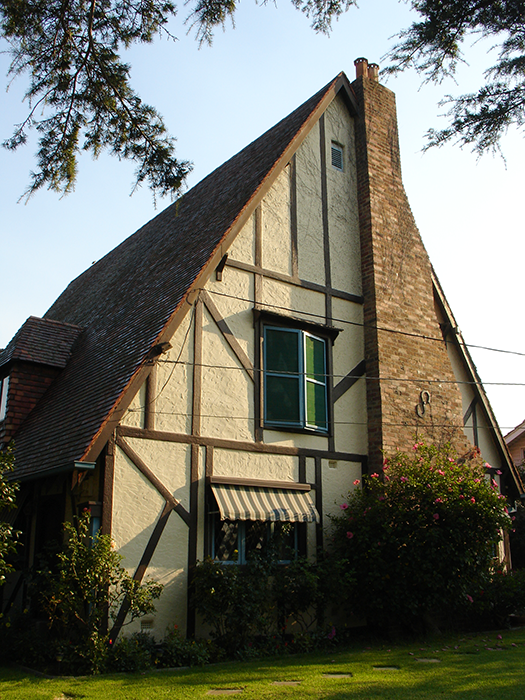 The gnarled old trees had been kindly provided by some right-minded person 'way back in the 1880s or thereabouts, and in consequence my life, during the building operations, was one long struggle with electricians, plumbers, carpenters, and gas men. Their hands itched for their axes ... this tree was in the way of that pipe ... the only way to do so-and-so was to take down those dear old trees –‘dear’ not being the actual word used, either. Possession being nine points of the law, however, the trees are still standing - and hale and hearty at that.

Fortune smiled over the flags. Flag paths are an expensive luxury when you buy them in the ordinary way, but the possession of a keen eye for the out-of-the-way junkyard, or the few slabs at the back of the old garage (a sometime stable), will achieve a remarkable acreage of flagging at the cost of a very few pounds.

This article would not be complete without a very grateful acknowledgment to Mr James Nangle, the author of Australian Building Construction, the very comprehensive textbook from which the constructional details of this ‘home-made house’ were worked out. I took an active part in its building (I wore out three pairs of overalls and a baker's dozen pairs of gloves on the job) and I can safely recommend those people who are "fed up with everything" to go and do likewise. Personally, I got quite a lot of fun out of it.