There is a story, possibly more of a legend, about a young Melbourne couple who were married in the early days of the colony and chose Brighton for their honeymoon.  This was not unusual for the time, as the burgeoning seaside town was already a popular holiday destination. However, writing in his popular Australasian newspaper column in 1885, Robert “Aegles” Wallen mused that no newlyweds before or since had spent their honeymoon as these two did – “up to their necks in the sea”!

The date of the wedding was February 6, 1851, and the couple had been forced to take shelter at the beach from the infamous Black Thursday bushfires.

"There was thick bush everywhere" 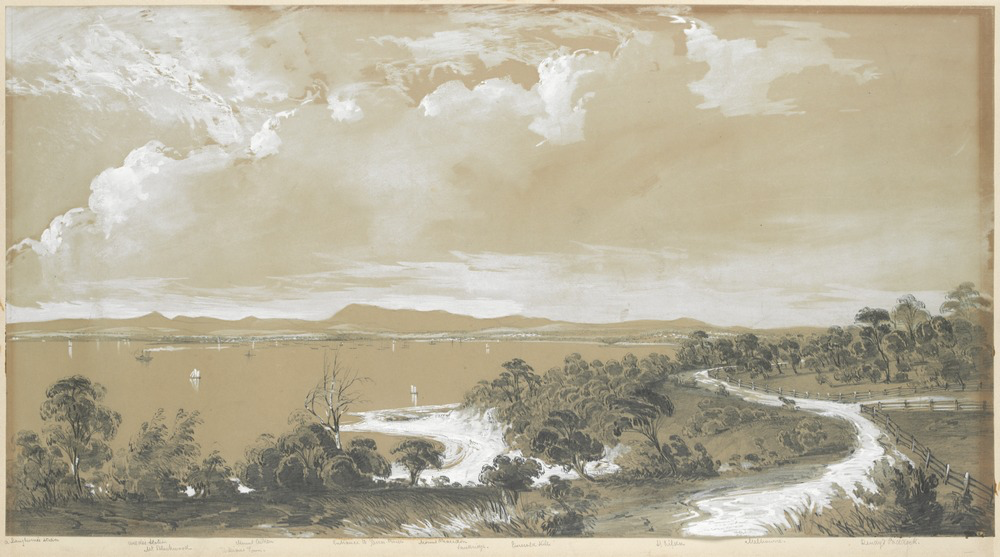 George Alexander Gilbert, "View of Hobson's Bay looking north from Brighton", circa 1847. State Library Victoria.At the time of the fires, the colony of Victoria was still in its infancy, its break from New South Wales approved but not yet formalised. Settlement was sparse.  Melbourne’s population hovered around 23,000, with another 54,000 scattered across the greater Port Phillip district.

Brighton, nearing its tenth anniversary, was a small but rapidly growing town. Wealthy Melbourne professionals were attracted by the seafront, where already a number of grand houses had been built, while market gardeners were drawn to the ample inland areas. One 1849 estimate placed the population at around 1,500 – almost triple what it had been at the time of the 1846 census.

But although the town centres were seeing a steady growth in shops and trades, much of Brighton was still bushland.  George Lawrence, who was six years old when his family settled in Brighton in 1850, recalled a landscape of thick bush and widely scattered houses. Many years later in 1917, he shared his memories of early Brighton with a Southern Cross reporter:

"There were splendid gum trees, enormous quantities of wattles, sheoaks, honeysuckle … and ti-tree in galore. In the earlier days there were a few kangaroos; occasionally a flock of black and white cockatoos would fly over; while parrots, leatherheads, wild pigeons, magpies, and kookaburras (Laughing Jackasses) were plentiful. Snakes were still more so."

Long-serving councillor and mayor Thomas Wilson was also a child in Brighton at this time; he remembered getting hopelessly lost on a walk between Brighton and Hampton, eventually finding himself wandering somewhere in the vicinity of the present South Road.

That summer of 1951, the Lawrence boys were hard at work helping their father with the construction of what would become the new family home.  Since moving to Brighton, the family had been living in a big shed behind Simeon Male’s butcher shop – a tight squeeze for two adults and eleven children. However, William Lawrence had recently acquired three acres of land on the corner of Male and Wilson streets, where he planned to establish a house and a market garden. 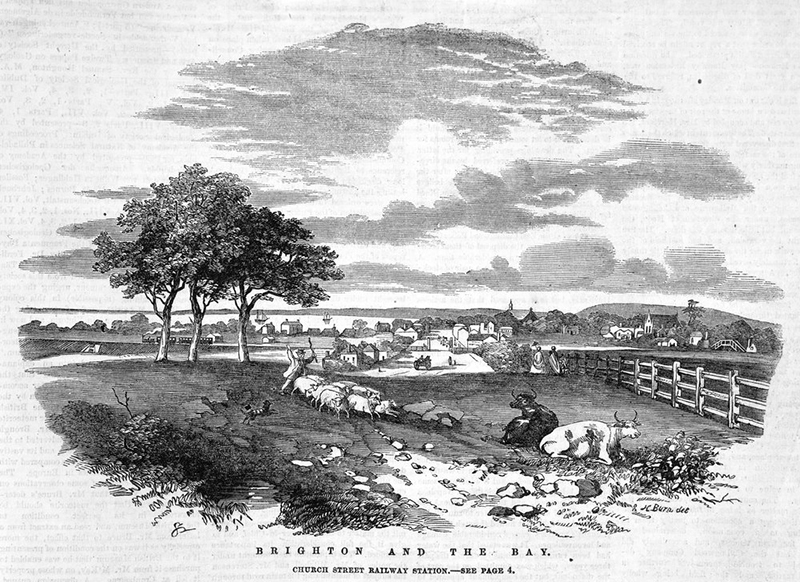 Samuel Calvert, "Brighton and the Bay", 1862. State Library Victoria.William set about building a four-roomed wattle-and-daub hut, making good use of abundant trees and clay in the surrounding land. On February 5, he sent a number of his children, including George, to Double Lagoon, an area of swamp between Sandringham and Cheltenham. The children gathered two large bundles of rushes, which William planned to use as thatch for the roof.

The next morning, February 6, dawned hot and murky. As the day wore on, the heat soared and a brutal north-north-westerly wind brought in a heavy dust haze that blocked out the sun. Artist William Strutt (1825-1915), whose dramatic painting of the fires hangs in the State Library of Victoria, recalled that morning:

"At the breakfast table the butter in the butter dish was melted to oil, and bread when just cut turned to rusk. The meat on the table became nearly black, as if burnt before the fire, a few minutes after being cut. … Cold water you could not get, and the dust raised in clouds by the fierce wind was sand which penetrated everywhere."

Temperatures were not yet officially recorded, but unofficial reports ranged from between 44 and 47 degrees Celsius – comparable with the temperatures recorded on Black Friday in 1939.  The wind fanned a number of isolated fires that were already burning across the colony, driving them together and spreading burning embers across the parched land.  Ash from the fires rained over Bass Strait; one ship’s sail was even set alight by a stray ember.

"Pretty well the whole of Brighton was ablaze"

As smoke filled the air, William set the children to work again, this time fetching water to fight the approaching fires. “Lor! how we did have to work to save our new home,” George recalled in 1917. “Hour after hour we had to carry water from the holes from which the clay had been taken, to keep the fire from catching hold. Pretty well the whole of Brighton was ablaze.”

William Strutt, "Black Thursday, February 6th. 1851", oil on canvas, 1864. State Library Victoria.How much the fires actually encroached on Brighton is difficult to know.  There was no local newspaper at the time – the Brighton Southern Cross would not begin publication until 1871 – and few written accounts from Brighton residents of Black Thursday survive.  Memory can be notoriously unreliable, and it is possible that, to the six-year-old George, the fires felt far closer and more extensive that they were. Indeed, to many adults who lived through Black Thursday, it seemed as though the whole colony was on fire.

But regardless of how much of Brighton burned, the effects of the bushfires would have been felt through the whole town, as they were throughout the colony. These were the first wide-scale bushfires in the history of colonial Australia, and they quickly became embedded in the national consciousness.

William Head, the son of another early Brighton pioneer, was driving a team of bullocks from Brighton to the Maribyrnong River on the day of the fires. It was a journey he was well used to – at age eleven, he had been carting wood into Melbourne for his father for two years – but the oppressive heat and the thick dust clouds made it a struggle.  Speaking years later in 1921, he recalled,

"A fearfully hot north wind was blowing. My bullocks had a drink at the Yarra near where Prince's Bridge now stands and I never thought I would get them out. I don’t blame them, poor beasts, for it was a terrible day. The dust was dreadful and the sight of many people was affected by sandy blight."

It would be over ninety years before the town even came close to being threatened by a major bushfire again.  Brighton itself was spared from the fires that plagued Victoria throughout the summer of 1943-44, but not all of Bayside was so fortunate. Just as in 1851, an extended drought, a hot northerly wind and a small number of spot fires united to deadly effect, raging through the thick tea-tree scrub and destroying more than fifty houses in Beaumaris and Black Rock. More than one hundred spent the night camped on the beaches around Beaumaris and Mentone.