The Brighton Cyclone: A century on

A century ago, Brighton experienced a weather event unlike any Melbourne had seen before or since. 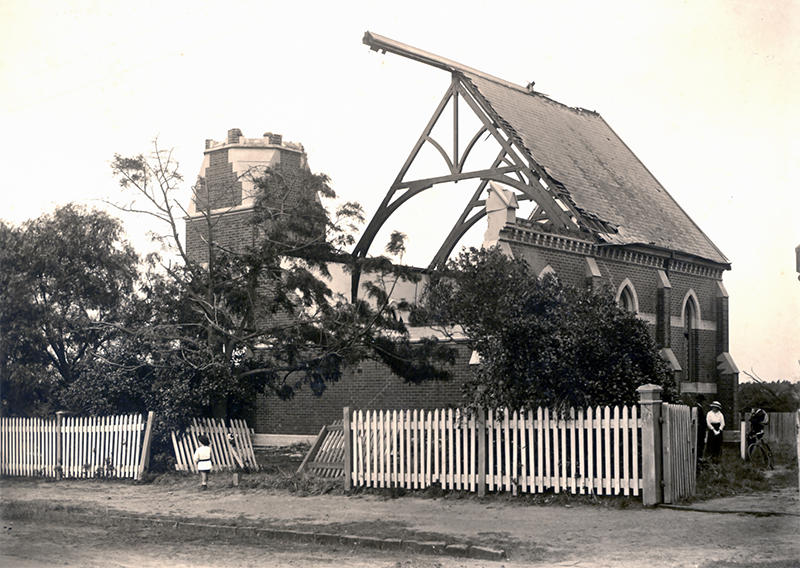 Damage to the Hawthorn Road Methodist Church after the 1918 cycloneIn the late afternoon of 2 February 2018 I walked to the beach at the end of Wellington Street, Brighton. The temperature was in the low twenties, the bay sparkled invitingly and there was a southerly breeze which enlivened the water by ruffling it to a gentle swell, accompanied by ‘white horses’. It was indeed an idyllic scene.

Exactly one hundred years earlier, our forebears were not nearly so fortunate. On 2 February 1918 they endured what has passed into history as the ‘Brighton Cyclone’.

The tranquil suburb of Brighton is not known for extreme weather events. While it is true we experience the occasional flooded street, or wild winter weather on the foreshore, the ferocity of the Brighton Cyclone was the stuff of which legends are made, and justifiably so. It lived on in family anecdotes for many generations.

The cyclone caused three deaths, two directly and one indirectly, many injuries, and an estimated 150,000 pounds worth of damage, a very considerable sum by today’s standards. The winds were said to have reached 220 miles (equivalent to 320 kilometres) per hour. By comparison, the speed of the winds of Cyclone Tracey in 1974 reached 217 kilometres per hour before the measuring instrument at Darwin Airport broke. The speed of the winds generated by Cyclone Yasi in 2011 reached 285 kilometres an hour.

Perhaps the saving grace (if such a thing could be said to exist) of the Brighton Cyclone was its brevity. Most sources estimate that the height of the storm lasted between two and four minutes. Cyclone Tracy and Cyclone Yasi and other comparable weather events went on for many hours, in some cases, days. However, the intensity of the storm in Brighton on 2 February 1918 for those few terrifying moments caused some people to think they were experiencing the end of the world. 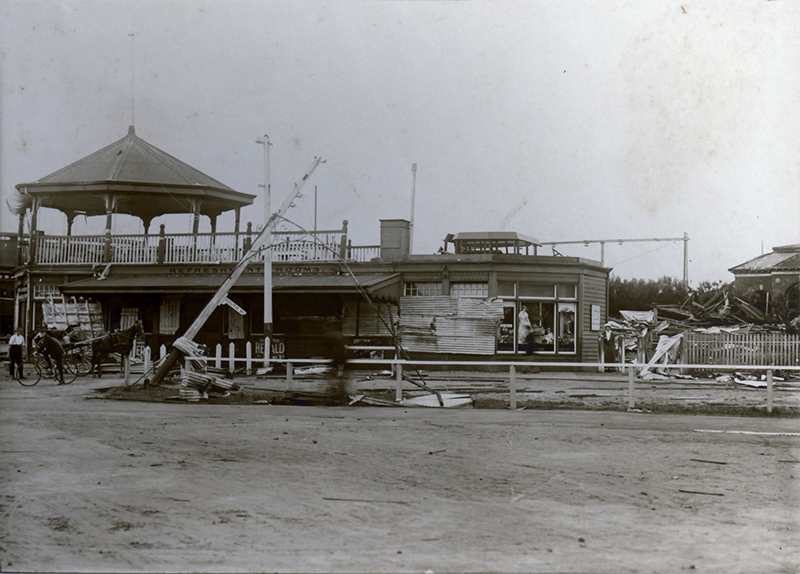 Damage to rotunda, tea rooms and bandstand at Brighton BeachSome of the contemporary newspaper reports are contradictory, but the accounts that survive give us a very real sense of the terror that was experienced. The day had been hot and sultry and the temperature had exceeded the milestone of 100 degrees Fahrenheit (38 degrees Celsius). During the afternoon the humidity of the morning gave way to strong winds and driving rain.

At about 4.30 those on the beach noticed intense blue-black clouds gathering over the bay in the south-west. Mrs Penny, who resided at the Brighton Beach Baths, observed the ‘tide run out at a surprising pace ... and just as quickly the water returned in a wave’. Shortly afterwards and without further warning the storm arrived and unleashed its fury with unprecedented violence.

One reason for the severity was that the cyclone actually comprised at least two major storms, which contemporary reports refer to as ‘tongues’. These storms came from two directions across the bay. One storm approached from Williamstown and arrived at the beach opposite the end of Wellington Street. The other ‘tongue’ came from further south and crossed the foreshore in the area near the Brighton Beach railway station. Some contemporary accounts mention a third ‘tongue’ which hit the coast in the region of Chatsworth Avenue to the north.

Much havoc was caused along the foreshore and adjacent areas. Brighton Beach Baths were virtually demolished, Brighton Beach Station was very badly damaged, as was the nearby Royal Terminus Hotel (now Milanos). The houses in the area around Wellington Street suffered greatly. One of the greatest dangers was the hazard caused by flying debris, notably slates and other roofing materials, which were said to ‘fly through the air like birds’, as the wind ‘danced around the compass’. 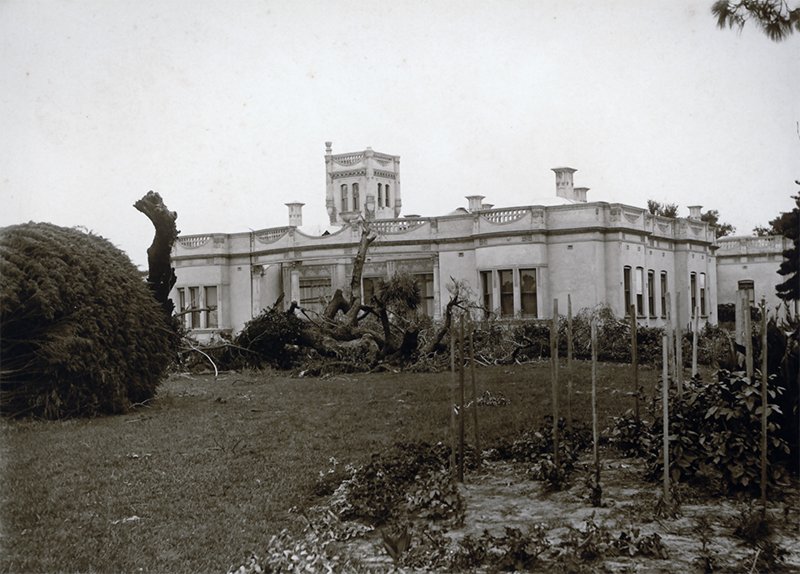 Damage to Billilla in Halifax StreetThe two main storms continued inland and converged at Billilla, the Weatherly family mansion in Halifax Street which bore the brunt of this phenomenon. Every tree in the well-established garden, with the exception of one which still exists today, was uprooted. The storms then continued to travel inland, causing much havoc including damage to Brighton Cemetery and to the area of forest later to become Landcox Park, virtually demolishing the Methodist Church in Mill Street (now Hawthorn Road) and causing havoc in the market gardens in the areas now known as East Brighton, McKinnon and Bentleigh.

Although the destruction was most severe in Brighton, very serious damage was also reported in Elsternwick and St Kilda. The Age reported that the dividing fence between two properties in Chatsworth Avenue ‘was ripped out of the ground, not a post being left standing’. Another report refers to a cow being blown up into a pine tree, necessitating a very difficult rescue.

Contemporary news coverage does not report damage to the south of Brighton, where Hampton and Sandringham were not as densely populated as areas further north and east where the storm was headed.

Given the extent of the destruction, it is amazing that only three lives were lost. Tragically, the first reported death was that of a 14-year-old boy, Frank Green, who had been attending a church missionary picnic. Together with a friend he had taken refuge from the storm behind a kiosk. He was hit in the head by a piece of iron which the cyclone had dislodged from the roof of another building. The young lad was fatally injured and died at the scene. 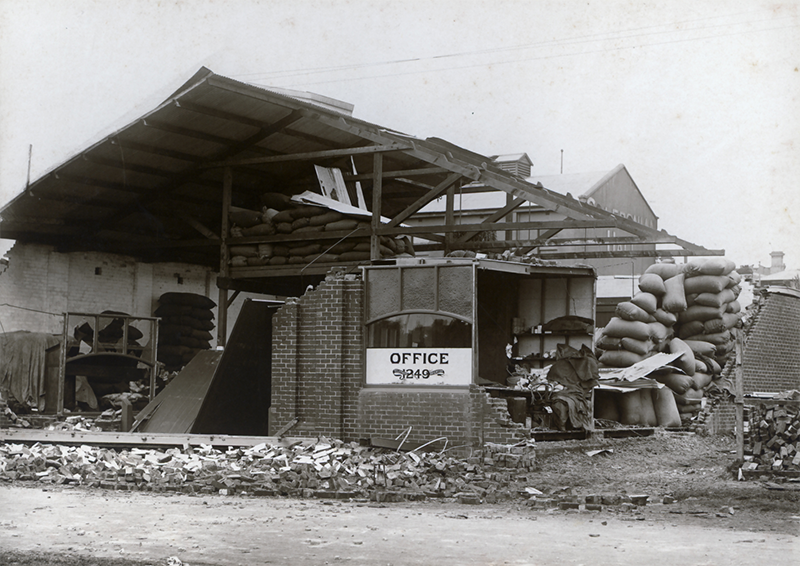 Damage to Mr J. A. Grant's hay and corn store in Well StreetAs on any day in summer, most of the sailing clubs around the bay had craft out on the water, many involved in racing. Mr Gordon McLeod, a visitor from Sydney, was sailing in a dinghy in the St Kilda area. The dinghy capsized in the gale-force winds and Mr McLeod did not survive.

The third victim, Thomas Edward King, was sheltering from the elements quite a way inland at Bentleigh, when his horse, frightened by the ferocity of the storm, threw the rider to the ground. As a result of the injuries he sustained Mr King developed pneumonia and died three days later.

In the week that followed, Melbourne’s newspapers were full of descriptions of the cyclone, to the detriment of coverage of the Great War raging far away in Europe. Somewhat opportunistically, Macpherson and Lawrie, of Church Street Middle Brighton, placed an advertisement in the Southern Cross newspaper advising ‘Cyclone damages speedily and effectively made good’ by their ‘large staff of bricklayers, plasterers, tilers, carpenters, slaters, plumbers, glaziers and painters’. There would, indeed, have been much employment for this team of workers.

Accounts of lucky escapes also featured prominently in contemporary reporting. Six-year-old Winnie Kendall lived on the corner of Wellington Street and Albert Street. In the late afternoon of 2 February the little girl was home with the family maid and had just gone upstairs to her bedroom when the full fury of the cyclone struck. An outside wall collapsed causing the ceiling to fall, burying the child. Showing great courage the maid crossed the sagging floor and rescued Winnie, who sustained a broken leg. A neighbour conveyed the child to hospital in his ‘motor’. 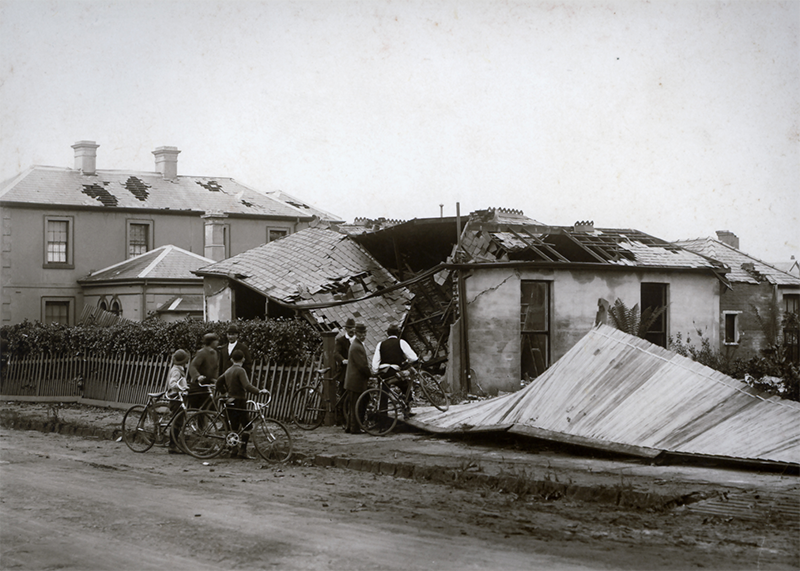 Damage to the home of Mr R. Smith in Wellington StreetFurther inland at Glenroy Park, near the corner of Hampton Street and Centre Road, a girl was milking a cow in a shed at the back of the property. Sensing the impending danger the cow became restless and the milkmaid left the shed. Almost immediately a pine tree fell on the milking shed and demolished it. The Argus did not record the fate of the cow.

At the Methodist Church in Mill Street (now Hawthorn Road) Miss Hilda Weber was practising on the organ. She and her companion noticed how dark it had become, when suddenly there was a huge clap of thunder, the door blew in, the force of the wind lifted the roof off and several trees were blown over. Miss Weber’s companion told The Argus ‘it was so sudden I did not have time to get my hat’. Given what could have happened to the hat’s owner, its loss was perhaps of little consequence.

The idea of a ‘one-hundred-year weather event’ was not in use in 1918. In any case it was only 84 years since a settlement had been established at Melbourne. One can only hope that this concept is not applicable to the Brighton Cyclone. If this were the case, who knows what might be in store for us in the near future?