Many of Australia’s most important and innovative women artists were born and/or grew up in the Bayside area. Perhaps you know of them - Jessie Traill, Janet Cumbrae Stewart, Norah Gurdon, Clarice Beckett, Jean P. Sutherland, Jessie Evans and Margaret Baskerville? 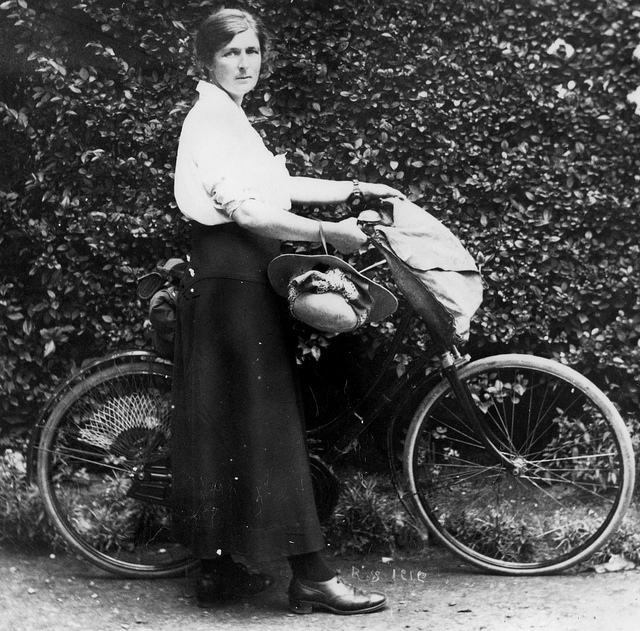 Jessie Trail, circa 1910 (State Library of Queensland)Jessie Traill, Janet Cumbrae Stewart and Norah Gurdon’s lives were linked. They were all born into wealthy families in the early 1880s and lived near each other – Jessie at Westra in South Road, Janet at Montrose in Were Street and Norah at Elmhurst in Church Street, Brighton. They attended the National Gallery of Victoria Art School and studied under the same teachers – Bernard Hall, John Mather and Frederick McCubbin, who lived for a time in nearby New Street. They were active members of the same clubs and organizations, and Jessie and Janet worked together on mural panels for the children’s ward of the Homeopathic Hospital, later Prince Henry’s. All remained unmarried and travelled extensively overseas.

During the First World War, Norah and Jessie served as volunteer nursing aides in France, Jessie for three and a half years. Her portrait in uniform, painted by Janet Cumbrae Stewart, is in the NGV Australia. The focus here is on Jessie Traill, who was a technically accomplished artist, and a bridge to the Australian modernists of the postwar era. The lives of the other Bayside artists will be explored in future issues of the Journal.

Jessie Constance Alicia Traill (1881-1967), the fourth daughter of Hamilton Traill, manager of the Oriental Bank in Melbourne and owner of a vanilla plantation in the Seychelles, lived a long and remarkable life. A humanitarian, deeply nationalistic and financially independent, she was a great observer of the massive industrial progress taking place, as well as the unspoilt natural beauty of the Australian bush. Her art reflects her love and fascination for both. But, like many other talented women artists of her time, she has yet to fully have her place in the sun. Two forthcoming books on her life and her oeuvre may go some way to rectifying this.

The story goes that she decided to become an artist when, at the age of ten, she met Tom Roberts painting on Black Rock beach, and they remained lifelong friends. During her lifetime, Jessie developed an uncompromising and rigorous artistic vision with a very clear aesthetic sense. To suit her objectives, she refined and altered the accepted techniques of etching - a complicated and demanding art form - that were revolutionary for the time. This sets her apart from the many more humbly equipped artists and etchers of her era.

Traill was a passionate adventurer who travelled all her life, starting from the age of two. At 12, she learnt fluent French at a Swiss school. In 1911 she went alone by boat to Java via New Guinea, to discover ‘the artistic vision of the East’. In 1946, at the age of 65, she returned from England to Australia by Flying Boat, taking eight days, and making watercolour sketches from the window along the way. Many of these are now held in the LaTrobe Library, Melbourne.

A versatile artist, Jessie painted oils and airy watercolours, but she is best known for her etchings of industrial subjects, the new electricity plant at Yallourn, and especially the Sydney Harbour Bridge, (executed between 1927 and 1932), which have been described as ‘feats of visual engineering’, and are some of the strongest non-photographic images of the bridge’s construction. She was one of the first women in Australia to work in this medium and with Van Raalte, the first to produce colour etchings. 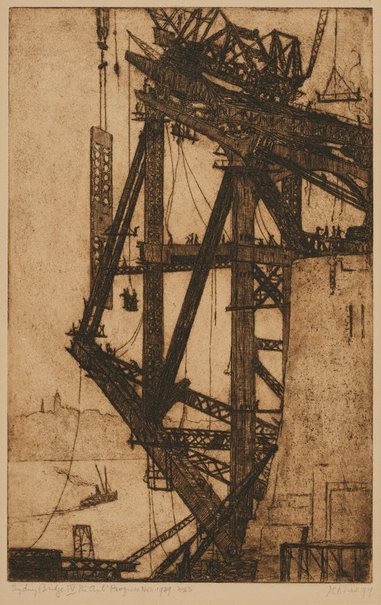 Jessie Traill, 'Building the Harbour Bridge IV: the ants' progress, November 1929' (Art Gallery NSW)At times her art displays a vigorous, almost markedly ‘masculine’ quality, although she never loses sight of a ‘feminine’ sense of beauty and wistfulness - nothing more demonstrates this happy duality than her aquatints, where she perfected a nascent technique of suffusing the ink across the image to create depths of shadow and light across the hard lines of the etching - a process utilising the scoring of the plate to create incredible wash-effects.

These aquatints, many of the Australian bush at twilight, are intimate mystical works suffused with a natural beauty that show both her deep empathy with nature, and a strong Japanese influence. She was particularly interested in the qualities and beauty of melaleucas, gums and other native trees. She is considered to be a proto-environmentalist, concerned with the disappearance of bushland to aid urban progress, and was an active member of The Beaumaris Tree Protection Society.

Jessie studied in London with the highly regarded etcher Frank Brangwyn who influenced her work, especially in the use of large zinc plates, and at the Colarossi Academie in Paris. She had works hung at the Royal Academy and the Old Salon, Paris, and won numerous awards including a gold medal for etching at the Panama Pacific Exhibition in San Francisco in 1914. She held exhibitions throughout Australia, and had various studios, in Bay Street, Brighton, and in Melbourne - at No. 9 Collins Street and Temple Court. Her students included Arthur Boyd, to whom she lent her etching studio during the late 1940s, and Fred Williams, an innovative painter of the Australian landscape.

Jessie was also the first professional non-aboriginal artist to paint in Central Australia and in 1928 an exhibition of her work, ‘pinned on grey blankets suspended on the walls’, was held in the Alice Springs’ schoolhouse and the whole population turned up. On a second visit in 1932, with fellow artist, Violet Teague, she was responsible for raising money needed to build a pipeline to provide water to the Hermannsburg Mission near Alice Springs, where the young Aboriginal artist Albert Namatjira lived. It is thought that Namatjira had been her guide when she painted in the area, and it is interesting to consider what influence she had on his decision to take up painting in 1936, as opposed to the more accepted influence of Rex Batterbee.

A devout Anglican, Jessie had a highly developed humanitarian spirit and proceeds of her exhibitions always went to charities. When stationed in Rouen, France, during the war she saw the near total destruction of a small village nearby and her money was mainly responsible for it being rebuilt. For many years after this, when visiting the village, the Mayor and the town band met her to escort her, with great ceremony, to her hotel. Closer to home, she planted an avenue of flowering eucalyptus on either side of the road at Berwick, not far from her last studio at Harkaway, in memory of the nurses who had lost their lives during the war. She also sponsored migrants and was a generous member of the Returned Soldiers’ League. Like her sisters, two of whom were nuns, she was deeply interested in the Janet Clark Hall at Melbourne University.

Arthur Streeton, a prominent member of the Heidelberg School, wrote in an Argus newspaper review on 3 May 1932, that “ Melbourne should be proud of that fine draughtswoman and etcher, Miss Jessie Traill. By incessant labour and observations, she has won for herself a high position by her fine sense of design and her most capable rendering of very difficult subjects. She dares to do a large drawing composed of enormous curves and angles and she does it successfully.”

Her family remember her in old age as a slight, small, very sprightly woman with arresting blue eyes, who was known for her warmth, gentleness, humour, kindness and generosity.

Jessie Constance Alicia Traill, one of Australia’s major printmakers, died at Dunbar Private Hospital, Emerald, Victoria, on May 15 th, 1967, at the age of 86, having lived an exceptional life dedicated to her art and to her country.