If you are in your retirement years, you may well have had your first date at the Prince George in Church Street, attracted by the dual cuddle seats in the upstairs balcony and the screening of continental films.

Prince George Theatre ticket, year unknownTo my knowledge, the Savoy in Russell Street was the only other place in Melbourne in the 1950s that screened works of interesting directors, non-mainstream films and old revivals. In early 1958, Colin Bennett, The Age’s film critic enthused, “Congratulations to the Prince George, Middle Brighton for being the only theatre in Victoria willing to give us a look at an Australian film – Cecil Holmes’ Three In One.”

Roger Seccombe made his first visit by train from Kew, prompted by that review, “The Prince George was dingy, dark and rather decrepit. But it was homey. I always felt welcomed by the family operators. Sometimes there even were children in attendance on the doors. Bert Ward XIII was chief ‘greeter’ to welcome patrons, and would take over as projectionist if needed. By 1960 it was all over: the cinema had gone, swept away by the tide of television.”

Sadly, nothing is left of this old cinema, except for the Munro’s Buildings laneway where movie posters once were pasted, and the bottom few concrete steps of what was the balcony entrance. But its involvement with both the Ward family of Dendy Cinema fame (the dynasty includes Robert Glanville ‘Bert’ Ward XIII, Robert Ward XIV and Robert Cameron Ward XV) and the builder David Munro still makes for a fascinating story. 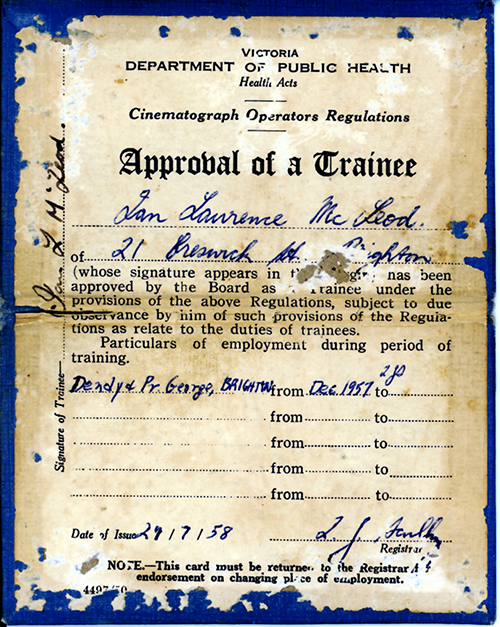 Trainee cinematograph operator card belonging to Ian McLeod, issued 1958In 1887, Munro acquired two blocks of vacant land in Church Street. The next year, he bought the two adjacent blocks of land from Mark Moss, the prominent financier and property developer, who was to later build Norwood. Four brick shops were built and promptly leased, so Munro built three more in 1889, and also the Caledonian Hall which was at the rear upstairs and accessed by a covered laneway between the two sets of shops. It was named after the Caledonian Land Bank Ltd, which Munro floated to acquire his properties in Brighton and Canterbury. A meeting of shareholders early in 1889 claimed that he had sold the properties to the company at grossly inflated prices. In the land boom collapse, the value of shares in David Munro & Co. dropped to almost nothing as did the market price of his land. Today Munro’s Buildings at 76-90 Church Street still have an intact streetscape at the upper level.

The Caledonian was used as a public hall and a biograph theatre with the introduction of movie films in the first decade of the 20th Century. The hall was upgraded in 1920 and re-opened that July as the Grand Central Cinema. The renovations were carried out to create “an illusion of splendour…our patrons will get the best music this side of the Yarra, played by our permanent orchestra” claimed the first manager, Mr D. Moore. He reported that there would be 300 seats in the circle, another 300 in the back stalls and a further 600 in upholstered leather tip-up seats closer to the screen; only later was the seating reduced to a more comfortable number of around 700.

Robert McLeish Theatres of Swanston Street, Melbourne declared on the 13th October, 1926 that they had taken over operation of the former Grand Central and renamed it the Paramount. Their new acquisition would be ‘the home of Paramount and Realart Pictures’.

A Cremona Style M3 photoplayer, built by the Marquette Piano Company of Chicago, USA was installed using two pianola type rolls which could be remotely controlled from the projection booth. They were the finest mechanical pianos of their time and were mainly sold between 1905 and 1920. The Style M3 was over 16 feet (4.8m) in width: on the left of the piano were various drums and traps and on the right were organ pipes, all designed to accompany silent films. It is believed that the instrument was last played about 1930. It remained in the theatre until about 1960 when it was taken out and stored out-of-doors in a nearby yard. Ultimately wrecked by the elements, its remains were eventually scrapped.

Robert Glanville (Bert) Ward XIII had been working at the Hoyts Southern in Hampton as a ‘projectionist-cum-manager-cum-everything’ as his son described him. In 1928 he saw that the Paramount was up for sale and aged only 21 bought the theatre ‘going cheap and run-down’; with initiative and family assistance he made improvements. It was probably the first suburban cinema to have central heating and the first to convert to ‘Talkies’, with one of the best sound systems in Melbourne. This was reconstructed again in 1933 and re-named the Prince (’Prince George was the second youngest son of King George V and Queen Mary. He later became the Duke of Kent and was killed in an air crash during World War II). 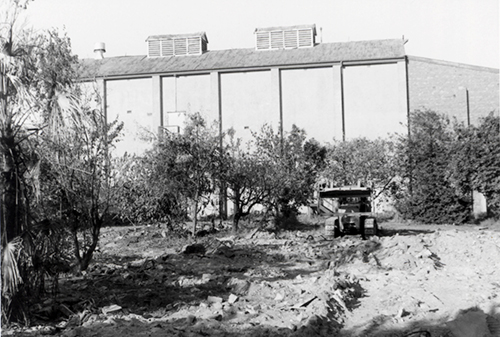 Rear view of the theatre in 1968. The garden of a house in Well Street was being demolished to make way for a parking area.With a new enlarged screen, the first Cinemascope film screened there was New Faces in 1954, starring Eartha Kitt. This was an exclusive suburban release and ran for some months.

In 1956, television had just arrived in Melbourne in time for the Olympics. Not many people could afford a set so Robert Ward XIV projected the TV transmission on to the big screen for a shilling (10 cents) admission. But dark days were coming for suburban theatres. Hoyts had forty-five in Melbourne and ended up with one. The Ward family had a number of theatres, including the Burnley (Burnley), the Civic (Ashburton), the Mayfair (Gardenvale) and interests in the Savoy in Russell Street as well as the Prince George and the Dendy. Robert Ward saw the demand for arthouse and foreign films and changed the Prince George into an arthouse cinema, the first suburban theatre in Australia with such a policy, he later claimed. The Japanese Rashomon and the Swedish One Summer of Happiness both did well and the Prince George was soon paying the Dendy’s bills.

As financial pressures increased on the Dendy Cinema, Robert Ward decided to close the Prince George, tore up the Dendy contracts and made the Dendy into an arthouse cinema A letter dated 13th September, 1906 from Bruce P. Selleck of Selkirk Enterprises Pty Ltd to the Public Health Department advised that his company had taken over the now-closed Prince George. It then re-opened as the Basin Street Jazz Centre, with everyone seated on pouffes. But films had not gone. When the Public Health Department made an inspection in October 1961, they found that films were being shown to Jazz Centre members only on Friday and Sunday nights. By the start of 1962, even the Jazz Centre had gone. 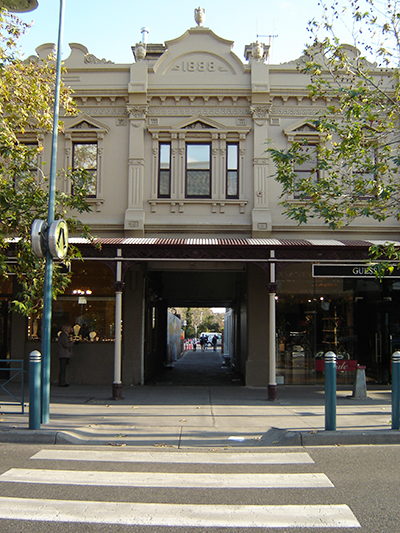 The Munro buildings and the alley way which led to the theatre, 2009In December 1962, a local light car club was meeting there each fortnight but a year later it was just a storehouse. The construction of the adjacent Safeway supermarket and its need for parking space made the derelict theatre’s demise inevitable.

Bert Ward XIII, a self-confessed movie buff, told the journalist, Corrie Perkin, in an interview, “The years spent running the Prince George theatre were an invaluable experience. Although it was a small theatre, I was busy doing every job, from selling tickets to working the projector.” His foresight and confidence that there would one day be a thriving suburb led him to the drawing board where he planned his dream – a cinema which would seat 1000 people.

In 1967, Robert Ward XIV told Howard Palmer, “I was running the old St. George (sic) – 100 years old it is – 100 yards along Church Street here when TV hit us. We were doing better there with continental films than the Dendy was with regular programs. So I closed the St. George (sic) – that was in the fifties – came to the Dendy, threw out all our contracts and began again with continental films and unusual films like underwater ones and 16mm art stuff.”

It is still there today but has grown to five cinemas and is successfully operated by Palace Cinemas as an arthouse cinema.